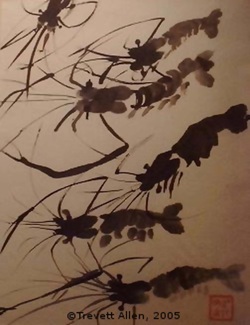 Brush painting is a set of traditions from the Pacific Rim.  I do a mix of Japanese Sumi-e and traditional Chinese brush painting.   For simplicity,  I will refer to both traditions as Sumi even though technically, Sumi-e is a Japanese form.  After getting to know more about each culture, then distinctions begin to make more sense.  The thing is, many experts confuse Chinese and Japanese paintings for each other.  From a Westerner's point of view, it makes sense to start looking at the whole Pacific Rim and then get more informed culture by culture.  Clearly they have a lot in common.  Each tradition also has distinct and different histories and mythologies and are as fiercely independent even while certain types of traditional paintings hold a lot of similarities across the whole region and traveling thousands of years into the past.

Brush painting is a fundamentally different approach to making images.  In a sense, it is the opposite of Western art traditions.  Western drawing and painting has drawing as its foundation.  Drawing is about line.  Lines create outlines or contours.  This means that drawings are made of distinct but connected objects.  We Westerners like breaking things down into little parts.  We are the culture of each piece being a separate thing.  Brushpainting on the other hand, is about interconnections.  Each work is a collection of practiced strokes of a thoughtfully loaded brush.  This means that instead of first drawing the outline (modern practitioners use pencils these days) images were practiced over and over until a vocabulary of brushstrokes were mastered.  That vocabulary of strokes becomes the elements of every painting just as brushstrokes assemble Kanji or Chinese characters.  Two strokes can make a piece of bamboo or an entire bird.  Its pretty cool!

Beyond technique is a notion of Chi or Ki.  The energy of each brush stroke is a somewhat mystical thing for us westerners.  From experience with this art form and with yoga practice, I have come to believe it is simply a different way of thinking about how we put feeling and our whole being into the way we do things.  In a sense, the philosophy of chi or ki is a more involved way of considering doing something; this way of looking at things includes more than just the scientific elements or the list of pieces and includes the manner, approach, mood, and intention in the act of each mark that is made.  By recognizing our energy as we work we become aware of a deeper sense or perhaps just a different but more immediate sense of creative flow.  I don't mean to imply that Pacific Rim traditions are superior but rather, it is different.  Sumi offers certain advantages in incorporating the many elements as a creative practice.  It can limit the range of style and does not compartmentalize as well.  It is a powerful tradition that offers a philosophical experience that I find balances my own tendencies to compartmentalize and analyze.  It requires more total attention and I have to think differently which is hard, but the benefits are equally profound in both the experience and the results. 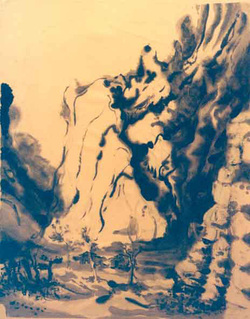 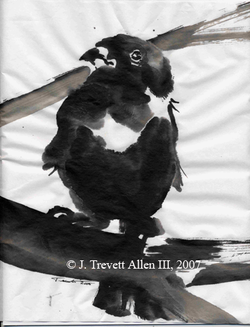